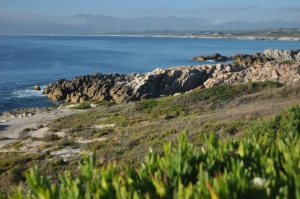 Some things you just have to do….one of those things in Cape Town is visiting The Western Cape; the drive from Cape Town is beautiful through the Dynefontein Mountains and wine vineyards. Our first quick stop on the drive was at Hermanus Beach. Hermanus is popular for land-based whale watching of the southern right whale; a 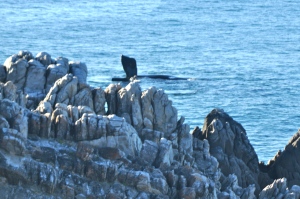 fantastic past time for a short time or if you’re 90. If you remember from my post regarding the “big 5” and “magnificent 7” while on safari;the large whales are considered one of the “Big 2” in the sea in South Africa. We continued up the coast a couple more miles until we finally came to Gansbaai. This sleepy sea village is home to the other animal part of the “Big 2” in the sea. 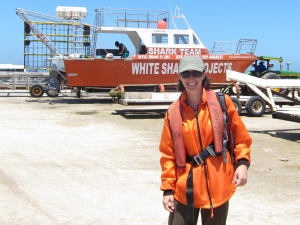 As we boarded the boat my stomach flipped over with nerves and my mind raced with anticipation. Shark cage diving is not what I do on an average Tuesday. Oh yeah, you heard correctly. Shark cage diving with actual great white sharks! Don’t worry the sharks can’t get into the cage, or at least that’s what I was told while I was signing a two page waiver. As soon as we dropped anchor the skippers on the boat began making chum, I suddenly had a strong desire for sushi. Anyway, we waited and waited and waited. 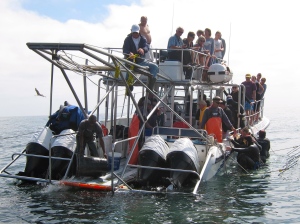 The crew continued to scatter the chum and we patiently waited, and waited and waited. Eventually we picked up anchor and moved to a new spot. The first group of five people climbed into the cage and I stood on the upper deck of the boat ready for the first shark view. Once in the cage the crew threw a large chunk of bait attached to a buoy about 10 feet out from the boat. When a shark got close the crewmember in charge of spotting alerted the divers and then yelled “DOWN!” The crew reeled the bait towards the boat in hopes that the shark would swim really close to the cage. We didn’t have diving equipment, only our breath, when the crew yelled down we pulled ourselves below the surface of the water. 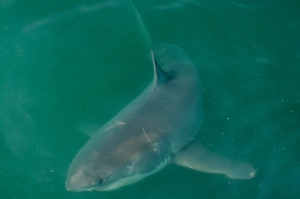 I was in-group two; without hesitation I put on my weight belt, mask and booties and jumped right into the cage. After seeing group one I wasn’t scared just excited to have my turn. We didn’t have as much luck with sightings in the second group; I saw the shark swim by and ignore the bait a few times. Nothing scary, nothing too exciting except that my fingers began to shrivel and freeze. I got out of the cage with a tepid feeling; I thought there should be more sharks and more excitement. The word on the street is that in the summer (which it is now) the water is actually colder and the sharks aren’t as active. Fortunately, there were only four people for the last group and when the crew asked if anyone wanted to go again I jumped at the opportunity. I climbed back into the freezing water to get another look at jaws! This was a great decision because even though I was shivering 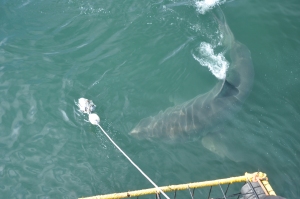 I had one of the best views of the entire day. At one point Jaws came around for the bait and this time he went for it and came swimming DIRECTLY into the cage. It all happened so quickly, but it was extremely intense. I started screaming under the water when I saw the massive jaws, teeth and eyes about 6” away from my face. The shark swam away quickly and we all surfaced amazed and yelling about the experience. The crew pulled us out of the cage because we had to get into shore while the tide was still high; we stayed on our shark high the entire ride back to Cape Town.

9 Responses to Below the sea