Cappadocia, Turkey: The land of ferries and chimneys 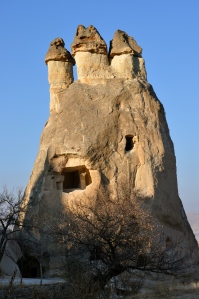 I left Istanbul to explore some of the more “exotic” areas that Turkey has to offer. I planned a loop that took me from Istanbul through the middle of Turkey in the Anatolia region and back all in about a week. My first stop was in a place that George Lucas once sought out for Star Wars.

My first day was a free day to catch up on some sleep after the long and sleepless, twelve-hour bus ride. I could have flown, but I’m on a budget and these are the breaks of being on a budget. I sat next to a lady who invaded my personal space for twelve hours; apparently she didn’t see the line because she crossed it the entire night. I arrived to my hotel, which was naturally carved into the side of the mountain. In keeping with the cave motif my room had no windows, just a door and a ventilation tube for the bathroom. Even the bed frame, headboard and nightstands were all carved right from the stone; there was cheap fake

wood floor littered with Turkish rugs, I thought they 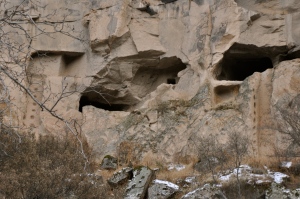 should have just kept the natural floor stone – but what the hell do I know???

Goreme, pronounced Gore – em – ay,  has roughly 2,000 residents and ALL of their business is based on tourism. Since it’s the off-season right now I was welcomed with open arms by shopkeepers, restaurants and my little cave hotel. I wandered around the  town, saw the rug store,

the leather store and the ceramic store all in about an hour. I hiked up to the highest point I could find to survey the area and then hiked down since it gets dark so early. I had a nice dinner at the hotel; I was the only guest and the people running the hotel invited me to have dinner with them. After dinner we went next door to the neighbors and played telephone over a few cups of tea. I say telephone because only one person at

the hotel spoke English so he had to be the official translator.  I must say they were very friendly and welcoming until I described where I was headed to after Turkey.  The mother, who was the most interested in my story, became very abrupt once she discovered my next stop was to Israel. She immediately asked next if I was Jewish, which of course I am. Sadly there was a shift in her tude towards me, but still the tea kept flowing.

The nearby volcano formed the area of Cappadocia; many moons ago the volcano in Mount Hassan erupted and filled the valley with volcanic material. Over the course of many years the earthquakes in the area combined with natural erosion left the area dotted with Pashaba’s or fairy chimneys. The second day I had a tour, we went

to another part of Goerme and the Open Air Museum. Basically there were a bunch of caves carved into various chimneys; many of which were used for monasteries, churches and other religious uses.  The guide told us about what rooms were used for, but I think it’s all hearsay – how do they really know what the rooms were used for, it’s not like there is an ancient floor plan floating around town. Anyway, we were able to climb around to the different areas and check out frescos that were thousands of years old; the place was so peaceful and calm that I could have spent hours exploring. 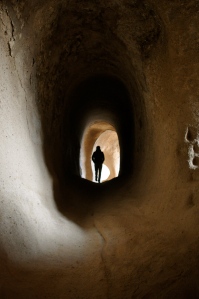 The first part of the third day was spent hiking through the Ihlara valley which is “composed of cracks and breakdowns which came into existence from the balsalt getting cold and the andesite intensity lava in the volcanic rock”.  The Melendis stream divided the mountain giving the canyon it’s appearance today. It was dotted with caves high above the hills – more shelters, churches and graves.  Some were accessible to reach but with the snow on the ground it made the climbs a bit treacherous. In the afternoon we went to the Derinkuyu underground city; the underground city is literally 8 floors below the ground. These caves where designed to protect the people during wars; they lived below ground for up to 9 months; considering they were “cave men” they had some seriously sophisticated ventilation and security systems. It was a maze of stairs, ramps and small crevasses but we managed to see a number of the rooms throughout the underground city and get a feel for how life might have been like as a cave man.

This entry was posted in Cappadocia, Turkey and tagged Cappadocia, Istanbul, Turkey. Bookmark the permalink.

1 Response to Cappadocia, Turkey: The land of ferries and chimneys