3 Days in the North: Manchester & Ed-in-Bra

After spending a few days in London, I took a train North to Manchester. Jamie, my sorority sister, greeted me at the train station. If you are shocked and wondering how you didn’t know I was in a sorority, get over it! Admit I turned out pretty well and realize that it was 15 years ago. Manchester…where, btw, the atom was split for the first time, is a bustling city. Jamie (and Matt) moved to Manchester about 3 months for Matt’s job. Besides Jamie and Matt, what’s in Manchester you ask? Well, there is a gothic style city hall currently housing a very large santa, a library with a scrap of paper which claim’s to be from the Old Testament and of course a lot of pubs. So, as they say “when in Rome…” We got a pint after some touring of the city and drank outside observing the crazy Manchester-ites. The observation was based strictly on the fact that the people were by enlarge wearing either short sleeve shirts or very little clothing. As a native Coloradoan, and now seasoned New Yorker, I cannot get over the lack of clothing worn throughout most of the UK considering the temperature this time of year. I’m not sure if it’s A. because they are as they say “pist” (not pissed off but pisst meaning drunk, wasted or hammered) and that’s why they don’t need to bundle up or B. they are simply a rare breed of humans who are able to withstand the cold in order to drink, smoke and socialize with other super humans outside at the local pub.Jamie and I also visited a local museum, a pop-up Christmas themed bar, the locks and Chinatown (supposedly the largest in the UK).

Before I tell you about our jaunt to Edinburgh, you should be aware that only Americans pronounce Edinburgh like Ed-in-borough. I learned, it’s really pronounced Ed-in-bra. We took the 3-hour train ride from Manchester to Edinburgh and even though there are limited snacks on the ride I would highly suggest this mode of transportation. The train ride helps get you in the mood with it’s rolling green hills dotted with fuzzy sheep and sounds of the bagpipe playing off in the distance.

Edinburgh is one of those places you hear about but it’s not until you actually step out of the station that one can really appreciate its beauty. The city is built up along a huge rocky mountain, there are multiple levels of stairways, facades and surfaces. Unfortunately, we did Edinburgh in 27 short hours. Since we only took a few for sleeping, we jammed a lot into the other remaining hours. Jamie is riot and likes to take silly pictures just like me so a lot of time was spent doing that amongst the magical scenery.

The down and dirty from our trip to Edin-bra: The Castle – pretty hard to miss (caught the one o’clock canon firing, and had a midnight viewing). The Holyrod Palace, Cahill Hill, pronouncing ED-in-BrA, pointing out all the bright red hairstyles,debating if it’s true what they say about the lack of undergarments worn with a kilt, Dean Brodie’s Pub, Fishers in the City on Thistle and Hanover for salmon and other fishy delights, The Wiski Room (10 year old whiskey that was 40% alcohol- yowzer) and a late night cruise through Ramsey Garden.

Thanks Jamie (and Matt even though you weren’t there) for being an amazing hostess, The Real Mary King’s Close wouldn’t have been the same without you! 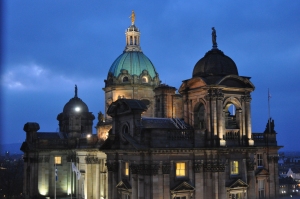 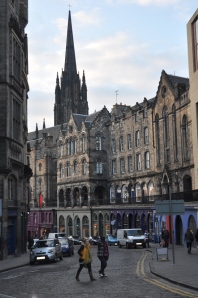 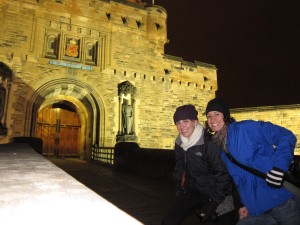 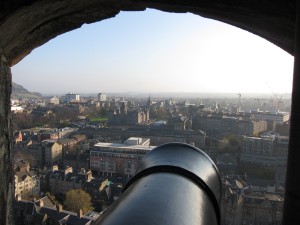 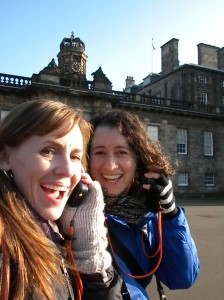 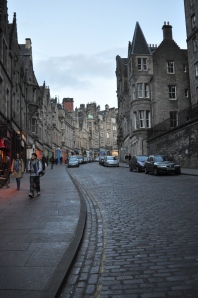 This entry was posted in Edinburgh, United Kingdom and tagged Edinburgh, Manchester, Pub. Bookmark the permalink.

2 Responses to 3 Days in the North: Manchester & Ed-in-Bra