To Bath and beyond…

What do you get when you combine waking up at 7:30 only to realize you’ve woken up an hour late for your pre-paid tour and running to catch the last pickup, a hour audio tour of Stonehenge, followed by an afternoon in Bath with an added bonus of a massive car accident on the highway turning a 2 hour ride into a 4 hour ride back to London, and topped of with a dry run thanksgiving thrown by your generous hosts? This is not a trick question; despite the craziness it was a fantastic yet VERY long freakin’ day!

Stonehenge is cool; I don’t care if the locals turn their nose up and claim it’s just for tourists. It’s really amazing to stand there and think about what went into creating the henge (circle). Awe inspiring to say the least considering when it was built and the tools which were available at that time. I personally liked hearing all the silly theory’s regarding why it was built etc. but my favorite was that the devil had dropped the stones in their place.

Bath is breathless. I wish I would have stayed the night because I only got a taste while running around trying to take in as much as possible and avoiding the shoppers on the busy main streets. I loved turning the corner and being on a 17th century street narrow enough for just a small cart or horse to maneuver. I lost track of time in the Roman Spa Bath museum, and I even stopped to get a complimentary glass of the all-healing water after my visit. I drank the whole the whole glass even though it tasted funky and was very warm. I felt stronger and healthier until I was totally grossed out when the woman dumped unfinished water back into the same spout from which the water was pouring…if, at any point, my semi-germaphobness lifts you’ll be the first to know! 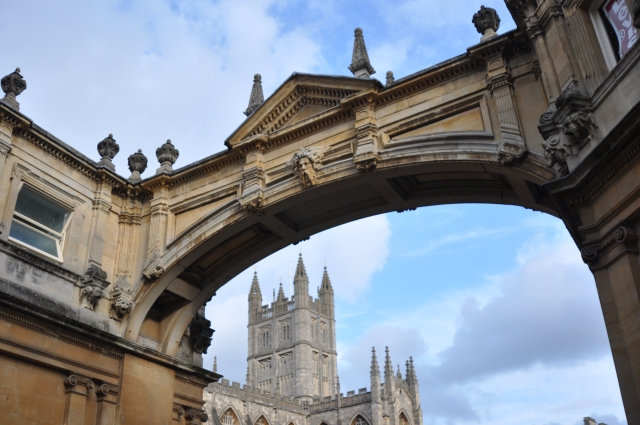 Sadly we were herded back onto the bus only to be stuck in 4 hours of stopped traffic due to a motorcycle accident. In the end I was greeted back in Regents Park by a lively preparation of a Thanksgiving dry run. Cooking Thanksgiving in London isn’t as easy as it sounds. Goods have to be shipped in and packages cost 10 times as much as what’s actually inside such as; canned cranberry and canned pumpkin. Anyway, we had Thanksgiving with a chicken instead of turkey, rice instead of stuffing and chocolate bars in place of pie. Even though it was a few days early without my family, it was a great way to spend thanksgiving.

This entry was posted in London, United Kingdom. Bookmark the permalink.

1 Response to To Bath and beyond…