Who knew, well I guess someone, that the temples in India are adorned with psychedelic mirrored mosaics, men who appear to be woman with 10 heads and 4 hands and wedding caked shaped building towering into the sky?  Clearly not me because I probably would have come to India a lot sooner if I knew that one could go on a psychedelic trip while totally sober. 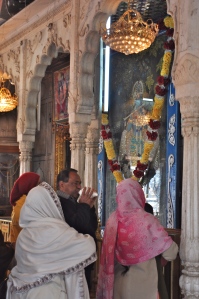 I’ll be the first to admit – I know nothing about Hinduism, their gods, their temples or anything in between.

My first night in Delhi, right after I was ripped off but when I was still blissfully unaware that I had been ripped off, we passed what appeared to be a nightclub since it looked like it could be some hot spot right out of the Meatpacking District. I asked the person driving if that was where we were going, he just laughed and said it was a temple. A temple? The entrance to this get-up wasn’t a door but a large mouth with 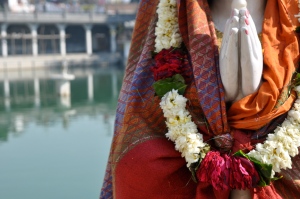 large teeth welcoming people with a queue, red carpet and on the top was a large monkey lit up like it was the Clark Griswold’s Christmas decorations. I was amused, excited and a little perplexed at the fact that I was utterly clueless.

I quickly learned that temples in India come in all shapes, sizes, colors and layers all fit out with various gods, bells and other accoutrements. Being as I’m a nice Jewish girl from a nice Jewish family the last thing I expected was to offer flowers, coconuts or better yet money to any god other than the one I already knew. Even more so I ne 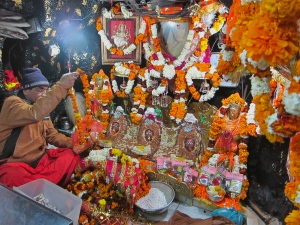 ver thought I’d be the first to whip off my shoes, accept sweet candy blessings from the hands of stranger or receive the ubiquitous forehead adornment. Yet, within the first hours after arriving I lost my virginity to all of the above. I did think twice before going barefoot because as they say “when in Rome…” and I’ve already had my fair share of little sweet candies that look like white raisins as

well as yellow, red and sometimes orange smudges on my forehead. I really can’t wait to see what’s in store during my travel through the rest of this mysterious land as I don’t doubt that there will be more temples, more gods and plenty more third eyes.

This entry was posted in India, Uncategorized. Bookmark the permalink.