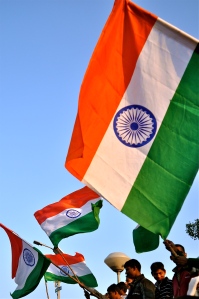 Border while I was in Amritsar. The border patrol, both Pakistani and Indian, put on an over the top performance every day when they close the border. It just so happen that I was there on one of the biggest National Holidays, Republic Day. Republic Day seemed to me a lot like 4th of July; they celebrate the independence from Britain. I was given two options of how to get to this shin dig 30km away: a. take a private taxi for more than my hotel costs for a night or b. take a local auto rickshaw for two bucks. When I arrived to the spot where the local rickshaws depart from I quickly found a guy who had one last space to fill and graciously gave me the back seat next to an elderly couple. I tried to get comfortable on the little bench just large enough to sit on at an angle with my toes hanging over the edge. I took cues from the woman 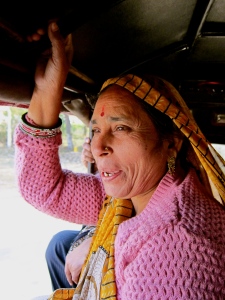 sitting next to me as she grabbed the frame above her head and used her other hand to hold her sari to her face. The first 30 minutes were amusing as I watched out the back, wide-eyed and proud of myself for going local. We passed horse drawn carts and men on bicycles carrying loads 5 times larger than their bike. The motorcycles driven by men in turbans with dark aviator glasses as well as trucks belching black exhaust fumes whizzed by us like we were the cow chewing on grass. The crowded city became small villages with woman selling oranges on the side of road, then quickly the villages became fields and eventually we were in the countryside. 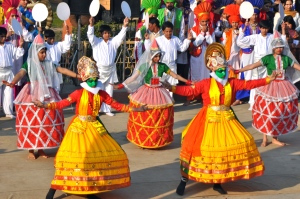 We finally arrived to the border and I was never so happy to see Pakistan. I hopped off the back of the little clown car and 10 others followed. The rickshaw consists of four rows, if you count the second row a real row. The “second row” is about 6 inches wide, your back is to the driver and your knees overlap with row number three. Anyway, it was a mad dash into the stadium and one of the creepers from my ride wanted to be m 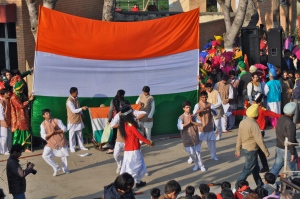 y escort. Luckily the men were split from the woman and I lost him in the crowd. Once I went through security I found the VIP section (foreigners are considered VIP’s at this event) and secured my seat. 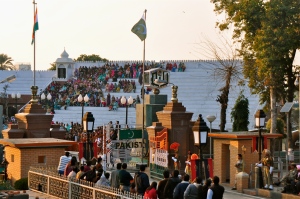 The first part of the show was put on a by what appeared to be school kids. The kids sang songs, performed traditional dances in brightly colored costumes and even did a re-enactment of the Indians succession from the Brits. Then the fun really began. They passed out popcorn, dimmed the lights and the announcer came on….not quite, but they might as well have. Grown men started high 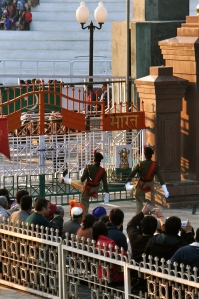 kicking, stomping their lavishly decorated boots and flinging themselves towards the border in a semi- militaristic fashion. There were loud horns; whistles and bullhorns while each side performed their choreographed show so dramatic you would have thought they were competing on a reality TV program.

Just when I thought it couldn’t get any more 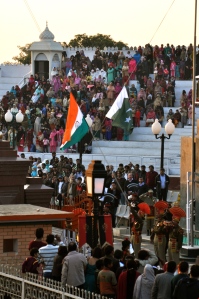 outlandish they flung open the gates and did more saluting and stomping in unison with the Pakistani brigade! After about 10 minutes of high-stepping and other shenanigans they artistically brought down the flags and theatrically closed the gates. After the crowd died down I found my way back to the clown car for a slow ride home in the dark thinking about how there are so many mouths to feed in India (as well as in Pakistan) yet this is how the government chooses to spend their resources each an every day.

This entry was posted in Amritsar, India. Bookmark the permalink.