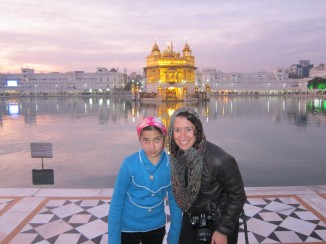 After lunch and a rest I was ready to brave the streets to see the temple during sunset and evening the light. I took a bicycle rickshaw earlier in the day and decided since I had nothing but time I would see Amritsar by foot; I laced up my walkin’ shoes, set out into the streets and started my journey. What I quickly realized was that there aren’t really sidewalks, streetlights, crosswalks and best of all the town also seemed to lack any traffic rules.  I looked both ways and tried to gauge the traffic several times yet I found myself feeling like I was in a human game of frogger. I was not ready to admit defeat as I watched the natives scoot across the street with ease through the invisible cracks in the traffic while every time I stuck my foot out to test the water my leg suddenly had a mind of it’s own and coiled back to safety. So, how did the chicken cross the road you ask? This chicken followed closely, very closely, as a local woman approached and without hesitation stepped out into the mayhem. I made sure she was uphill to the frenzy of traffic and blazed across the street at her side while holding my breath and praying to the local gods. I was psyched and then instantly deflated when it occurred to me how many more locals I would have to find in order to actually make it to my destination and wondered if hailing a rickshaw so early would be considered a KO (knock out). I found a girl who took me under her wing and dropped me off, practically unscathed, at the front door of the temple. The only beating I received was when she realized I was much older than 20, unwed, and gasp didn’t have ANY babies!

I already knew the drill with the shoes and washing so I cruised right into the temple just in time for the sunset. Not only was I seeing the temple literally in a different light but I was seeing the people and rituals differently. I sat and watched as some of the Sikhs immediately dropped to their knees and bowed to the Temple while others only bowed slightly with their hands in the prayer position. 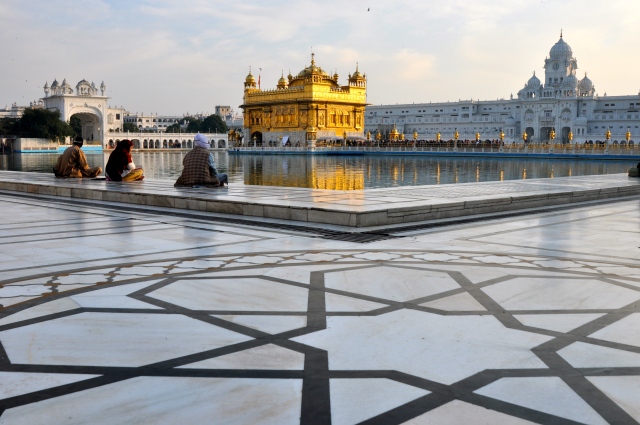 I observed how some followers were sitting alone deep in concentration while the temple reflection bounced silently on the holy water.

I sat watching the glittering temple as day turned to dusk, the colors became muted and the water slowly slowly lost it’s mirror like qualities.

I checked out the inside of the temple when the line died down and stupidly realized that the music I had been hearing all afternoon was live from inside the temple. Worshipers threw coins, bills of money, flowers and sweets and the priest used a large broom to sweep the offerenings towards the choir.

For dinner I joined the other thousands of pilgrims at the free kitchen, Harmandar Sahib. The kitchen is open 24 hours a day and serves roughly 40 to 50,000 people any given day. I was handed a metal tray, bowl, spoon and ushered into the large mess hall.

A traffic director motioned me to a spot on the floor on a tattered runner; I barely had time to look around when another man came around with a large bucket and dropped some yellow bean stuff into one of the compartments on my tray. Another man gave me some brown stuff, another a chapatti (a pita like bread), another sweet rice and another filled my bowl with water. I realized that people were being sat in an orderly fashion, from the back of the room to front in long rows. When I was finished I stood up, dropped my tray for washing and practically tripped over a man slicing potatoes.

When I stopped to take a picture of the mass preparation area a friendly Sikh with a bushy beard, almond shaped eyes and blue turban tapped on my leg and motioned me to have a seat and help the cause. 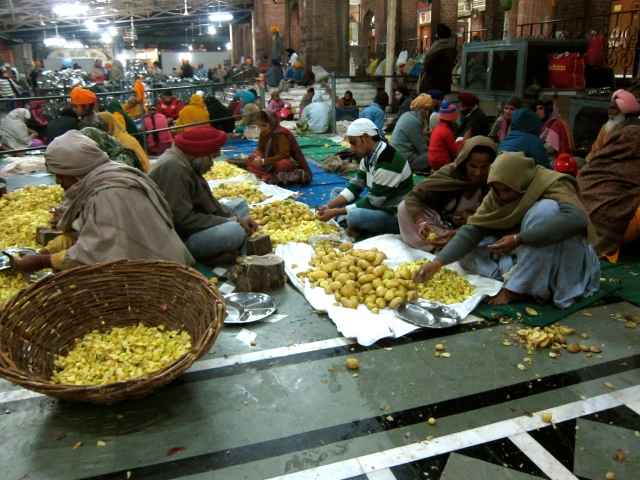 I was immediately handed a dull knife, a log stump cutting board and a stack of potatoes; after a while we were out of potatoes, but not out of a job. We slid over to the garlic department and I peeled garlic until my legs started to tingle and I began to understand the term “sitting Indian style”. After an hour of garlic peeling my new Sikh friends bought me a delicious cup of Nescafé, made sure I found my shoes and a hailed a tuk tuk since there was no way I was going to brave the streets back to my hotel!

This entry was posted in Amritsar, India and tagged amritsar, Indian, sikh, The Golden Temple. Bookmark the permalink.

4 Responses to Ding, ding, ding… The Golden Temple (Amritsar): Round 2