You are what you eat…Edibles of India 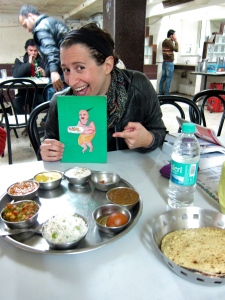 Don’t eat snacks from strangers on the train, be wary of anything off the street, make sure the mineral water hasn’t been compromised…with so many warnings for eating in India I wondered how I would pack enough peanut butter to survive the duration of my time          (5 weeks, which became 4 but then ended up being 7). For those of you who know me well, you know that when it comes to food I’m up there on the list of persnickety eaters. I grew up with a mother who despises onions, a father who gags at the sight of asiago cheese, a brother who thinks fries and burgers are the end all be all of food and a dog who turns his nose up at anything but gourmet puppy chow. Peppers, turmeric and god forbid curry weren’t just out of the question but words that weren’t in the Surfas dictionary. It wasn’t until I flew the coop and moved to the melting pot that I broadened my pallet, found some foodie friends and started experimenting in my own kitchen. As far as Indian cuisine was concerned before leaving

I had some Indian take-out at work, eaten in curry hill once or twice and had visited the crazy Indian restaurants on Second Ave. but nothing, I mean NOTHING could prepare me for what was to come. One of my biggest worries before leaving on this incredible journey was “What will I eat and how will my stomach hold up?” Well, I was in for a gastrological ride when I arrived in India.

First, I don’t (didn’t) eat spicy food. In India, whether it’s the North or the South you have your choice of spicy or really fucking spicy. I stopped asking for “not spicy” within days because even when I asked for not spicy, received the ambiguous head bobble as a reply, I still got spicy. Not spicy to me and not spicy to the locals proved to be an ocean of difference! Besides my mouth feeling like I had instantly become a fire-breathing dragon nothing seemed to disrupt my stomach, which had typically been like a delicate flower ready to fall to pieces at a moments notice. 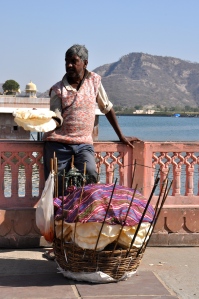 (i.e. breads and pasta). I’m not celiac, wheat just makes me feel shitty and let’s face it if it’s between toast or carrots I’ll pick the carrots 9 times out of 10. Well, In India most meals are accompanied by naan – thick bread, chapatti – thin bread, p

uri-deep fried bread, paratha, phulka…the list goes on and on and on. They use the various types of wheat goodness to sop up the “gravy” aka sauce in lieu of utensils, oh yeah – remember to only eat with your right hand. I thought trying to explain not spicy was hard, trying to explain no wheat was impossible – I threw in the towel, rubbed my hands with a little purel and hoped for the best. 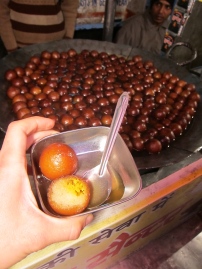 My favorite part of the food in India, besides the masala chai laced with sweat sugar, ginger, cardamom and other mysterious flavors were the desserts. Thankfully I left my tight going out jeans in New York otherwise they would have surely stopped fitting after my many samplings of sweetness. The Indians love their sugar that’s for sure; one of my favorite desserts quickly became gulab jamun. GJ is like a hole of a donut, fried and then soaked in cane sugar – served hot of course!

With my newfound stomach of steel I 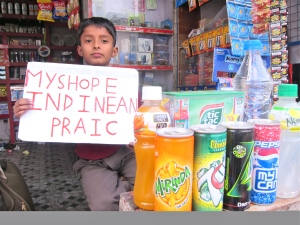 started playing Russian roulette at meals by ordering dishes with only a tidbit of knowledge at what they may or may not contain. After a few weeks I started to actually appreciate the flavors and come to enjoy the experience of sweating out spices; they say you’ve really found India when you start to smell like an Indian, well folks – I think I found India.

This entry was posted in India and tagged chai, food, India, masala, turmeric. Bookmark the permalink.

3 Responses to You are what you eat…Edibles of India