Part I: American Princess in Mumbai, the Darvi slums

Dirty, hungry and tired I arrived to the Mumbai airport after traveling in India for almost a month. I had a rendezvous at the regional terminal with my friend, we’ll call him Boom, around 11am. Boom and I met at NYU, he is Indian and lives with his family in Mumbai. When we graduated this last spring, 2011, invitations were extended to all our friends to come visit Mumbai; little did they know I would cash in on that invitation sooner rather than later and show up extremely disheveled with a bag of dirty laundry. When we were finally reunited it was great to see a familiar and friendly face after so many months on my own!

For most people Mumbai is a hustling and bustling city, the last word on their mind is relaxation. For me it was just the opposite; I had a little taste of the hustle and bustle, a lot of relaxation and I was able to finally wear the dress I’d been schlepping for months. Boom, if you’re reading this I want to say thank you not only to you but to your family as well. Your mom took me under her wing like I was her own baby bird and made sure I was safe while I was under her care. Your sister is lovely and such a sweetheart, all of her city suggestions were wonderful. For a brief moment in time I really was an American Princess!

My first Mumbai adventure started off with a tour of the largest slum in all of Mumbai.If you’ve seen the movie Slum Dog Millionaire you’ve seen Darvi, or something like it.

I had randomly run into my new SF friends in the Mumbai airport, they had a 12-hour layover and decided to join me on the tour. Our guide, a personal assistant to the family, had never been to the slum so it was an experience for him as well. During our walk through the streets I realized I had crossed over an imaginary threshold on my flight; it had finally started to get (India) hot and there were actually mosquitos! 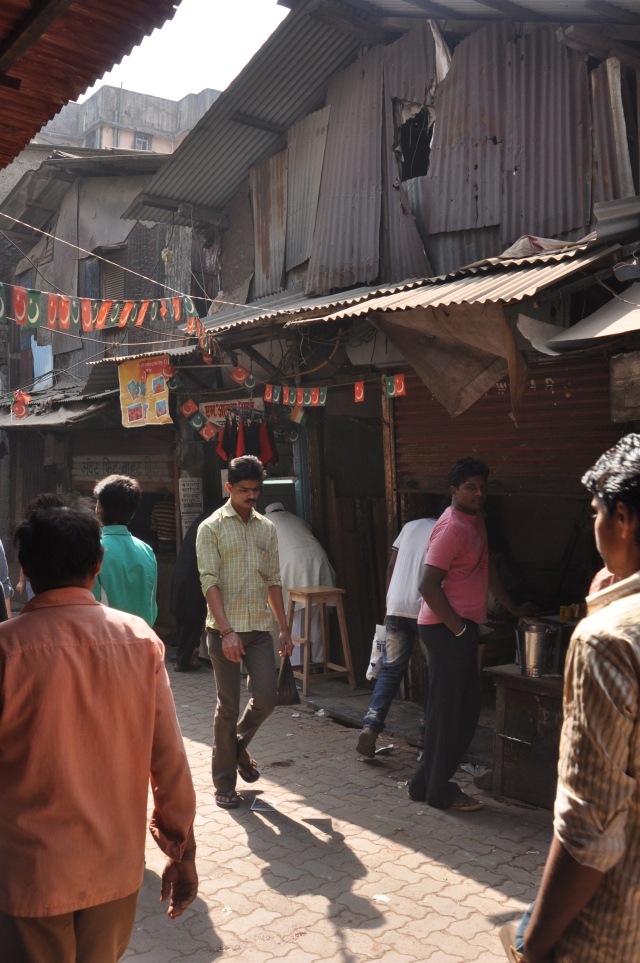 The slum visit was certainly a way to introduce myself to the city, we walked around for about 2 hours, first through the wider streets and then back through some of the narrow streets connecting the different areas.

The buildings were permanent but looked as though they had been pieced together with duck-tape, any other materials available and ready to crumble with a strong wind. Business was as usual as we took a peek into their world of carts of garlic, men reading newspapers on the streets, kids playing with sticks and woman carrying large sacks on their heads.

We walked among the neighbors, our skin and clothes like blinking neon lights, yet no one stopped us once for anything. We were stunned by how happy and content these people seemed although they were living in conditions that would make even the most impoverished American uneasy.

After the slum we drove down town to Colabra, saw the Gate of India and of course immediately got scammed by a guy selling large balloons. I thought it would be fun to have some for my brother, but when we opened the package we realized that the balloons were small and not large like the guy was showing. Seriously, I feel like just when I’ve learned their tricks I walk smack right into another one. 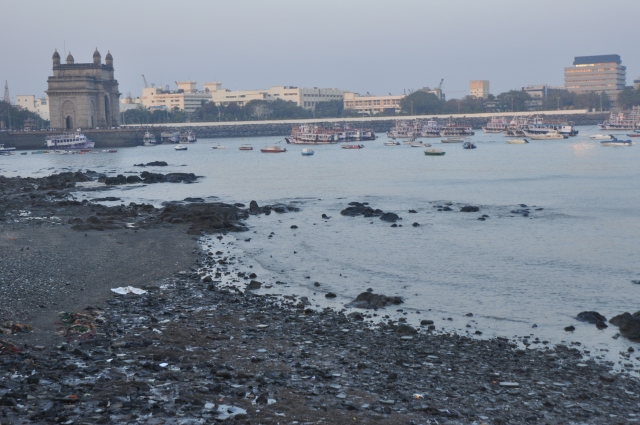 Ask any good India backpacker and they’ll tell you they’re either reading or have read the novel Shantaram, a very long and very dense book, mostly set in Mumbai. The main authors favorite haunt is Leopolds; along with every other tourist in town we enjoyed a cold drink and watched the afternoon slip by.

Our day of slums and scams ended in sheer decadence. We attempted to “freshen up” with a little baby powder, lipgloss and clean shirts – Boom and Dwani, Booms sister, took us to a seriously upscale establishment for some middle-eastern food, hookah and fancy drinks.

4 Responses to Part I: American Princess in Mumbai, the Darvi slums