Part III: The American Princess in Mumbai, The “real” world

Sometimes on vacation, or extended vacation in my case, we forget that the earth keeps spinning and people keep working. Since Shubham, aka Boom, and I met in Graduate school (New York University, Construction Management) it was only appropriate that I take a tour of his jobsites. Luckily for me it was just a tour because it was India HOT, high 80’s in February. We did a quick walkthrough, I gave my two cents, then we had a cold coconut and some bananas to refresh ourselves before heading to the next

site. The only difference I could find  from sites I’ve visited in the US was that there was definitely a guy wearing sandals and there were multiple temples for various gods scattered throughout. The second site wasn’t nearly as exciting; it’s just a lot for now. It’s in the planning phase, there is currently dirt being pushed around and buffalo grazing in the nearby pond.

Besides work, the real world of Mumbai was filled with: Bollywood movies, Jodi Breakers was my choice.  Even though I could only read between the non-existent lines I knew it was terrible (I only wanted to see it because the title contained my name , Jodi = couple in Hindi), late night clubbing, being highly opinionated about how the girls were wearing skirts barely covering their booties, discussions with Shubham’s mom about life and other such things, eating lots of strange new foods and playing with the new puppy Pocco.

My second reality check was the day I decided to take the local subway downtown; Shubham’s sister, Dwani, thought it was important to take the train and feel the real Mumbai. I tooled around the downtown, seeing all the main attractions from the infamous Taj Hotel, that was bombed, to the streets of Colabra. Going into downtown was fine, no problems, it was mid-day and the train was quiet. It was coming back when I had the real taste of the madness. I got on the train, the ladies only car, at the first stop downtown when the train was relatively empty. Each stop, as expected, got more and more crowded. Shubham told me stories of how there was a subway mafia that either didn’t let p

eople on or didn’t let people off at certain stops during certain times of the day. I have to admit, I really couldn’t remember if it was people getting off or on or which stop this nonsense started. I was more concerned with not passing my stop and the fact that it was getting so crowded, woman were practically sitting on my lap. After living in NY for seven and a half years, I’d like to think of myself as a veteran New York City subway rider, but this paled in comparison to rush hour in New York. I’m not sure if it was that I didn’t know exactly when my stop was coming up or the fact that I was a mashed potato wedged in between an old woman, a young girl and a baby overhead but I started to get a little nervous about my exit strategy. I had made a mental note of the stop right before mine; when we left that stop I started to make motions of standing up and before I moved one full cheek off the seat another body thrust me up and into the crowd. As I made my way to the doors, which are always open, I started to feel the train slow and could see that we were approaching my stop. I started to push a little more aggressively, I could finally feel the air from the open door but before I knew what was happening the 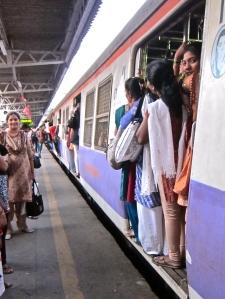 people on the platform started pushing their way onto the train before it had even fully stopped. My fight or flight senses kicked into full gear, I was using every ounce of strength to push myself off the train as they were yelling to get on. I was so close to the people below me that I could feel the determination in their eyes and the anger in the voices. As they yelled I yelled back and pushed even harder. Eventually, I managed to land on the platform, my heart racing like I’d just finished a triathlon and my knuckles bleeding. I stood there for almost a minute in complete disbelief, I had just witnessed first hand the Mumbai train mafia and it wasn’t pretty!