What to say about Goa?

It’s beaches, in India. But what does that really mean?

To me Goa is: Cows on the beach, little Vagator (my beach), woman selling sarongs, children selling bracelets, trance parties, cheap drugs (so I hear), yoga at dawn when the beach was blissfully quiet, tourists riding motorbikes everywhere (most not knowing wtf they are doing), woman selling fruit on the beach, LOT’s of Russians, markets on Saturday night, helping two gay men sell their crazy clothes at the night market & getting paid in wine, trash of course, scams, geckos in my sink, copious amounts of Kingfisher, beautiful sunsets, dreadlocks, government elections, beach parties, mosquitos the size of small dogs, 11pm curfews, Indian men who LOVE to stare at white girls in bikinis, a church with a saint who supposedly still has his skin after 200 years, long swims while keeping one eye on my bag, did I mention trance parties….yep, that’s pretty much Goa. 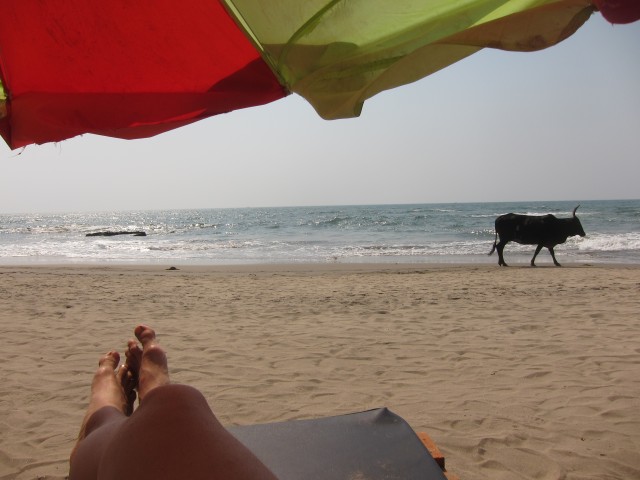 Apparently I was in Goa at one of the worst times, they were having elections a week after I left. The bars and clubs all had strict curfews that the corrupt government was enforcing for a month before the elections. This was to prevent votes being bought with beers and other such things. All this meant, for me anyway, was I couldn’t untz untz untz the night away at some rave type party with music that is meant to take you to the moon. The only problem, I wasn’t partaking in going to the moon enhancers so the trance parties were only good for superb people watching and some dancing. Yes, Elaine – my dancing alter ego was in full force. Trust me, no one was paying any attention to me!

This entry was posted in Goa, India and tagged beach, Goa, India, Vagator. Bookmark the permalink.