Lube jobs, helmets and a uniform…my life on an army base in Israel 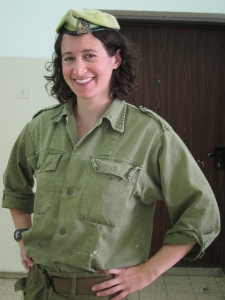 I switched bases for my last two weeks of volunteering, I was in the Northern part of Israel near Tiberias. This base is a non-combat base like the medical base near Tel Aviv but there are more soldiers who actually work  and live on the base. Thus, there was more eye-candy for pumas like me — ha, they are a mere twenty waaaaaaaaaay too young….that’s why I chose to keep my eye on the more senior officers. The communication base was a small area part of a larger compound; we were doing all sorts of things communication-ish. The soldiers are trained to fix radios, phones, helmets, antennas, cables and I’m sure a bunch of other stuff I don’t know about. My first week I was in the lubing cable station; 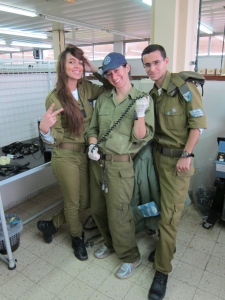 I basically sat for four days  lubing and cleaning cables with silicone. Not only did I have to guard the silicone with my life but I’m a quick learner and I moved up to using the massive sealing machine. Needless to say, I was deemed the lube job girl and jokes were prolific. After a week of lube jobs, I needed a break so I spent the final week becoming an expert helmet 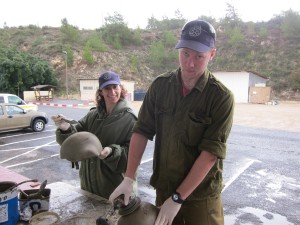 repair technician; sanding, painting, gluing velcro, tying hooks, zipping zip ties, and using the heat gun.  I plan to add both these skills to my resume when I decide to re-enter the working force!

The food at this base was one step up and 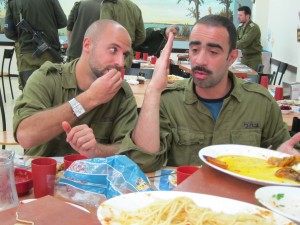 one step down from the first base. I say one step up because we actually had pretty decent lunches. I became very fond of the chocolate milk, you had to drink it directly from the plastic pouch. I also liked the white creamy cheese spread with the consistency of sour cream that could be doused onto anything. The step down was we were served directly at the table rather than buffet style. I realized about 3 days into our time in the North that my germ phobia had seemingly subsided because there was massive double dipping going on and I wasn’t bothered. When the different items were served it was every soldier for himself and forks were repeatedly used in different dishes after being used to eat. Apparently, a community dish without separate utensils is totally common – but then again so is taking money and then serving shwarma without gloves or hand washing. I guess in Israel they have bigger things to worry about than double dipping! 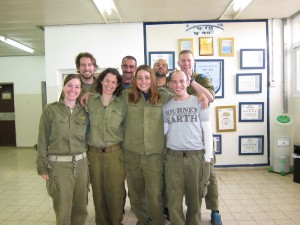 Only seven of us took the journey to the North, but it was a lively group. There was the Brazilian token gay man who snorted profusely when laughing, a tall 21 year old Aussi who is now Israeli and about to start his own IDF service, the soulful surf bum/chef trying to figure out his place in the world, the Texan turned Bostonian with hair that takes longer to primp than any girl I know, a bite-sized South African who is highly competitive and takes jabs whenever the opportunity arises & the other girl – she came 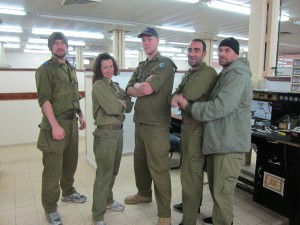 to Israel for the first time a few months ago and is now living the Zionist life in Jerusalem. We had two funny Madrichot.  Katan, a smart and introspective girl about to finish her army service; she lives a shomer negiah (modest and religious) life, a lot of proxy hugs and high-fives from the guys. Smooch, a sassy and opinionated brut with an answer for everything. They are actually great friends which added to the  group dynamic. The duo were our camp counselors; they made sure we were where we needed to be, translated conversations, and created interesting evening activities. 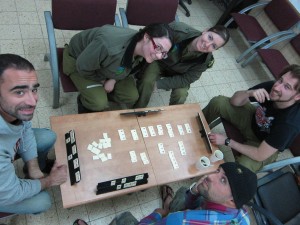 Evening activities ranged from learning about different places in Israel, the history of the State, games to learn Hebrew which involved playing twister like sports and mock conflict resolution situations. Katan and Smoosh kept us in line and made sure we didn’t do anything that involved steeling tanks or not otherwise  IDF approved.  After the sanctioned activities we played A LOT of card games, the Israeli game Rummikub,  stole each others things for shrink wrapping 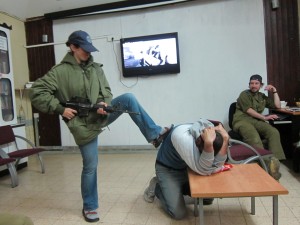 purposes, shot the shit with soldiers and generally hung out.

There was a massive amount of “hangin’ out” in the army. Not just between the volunteers, but particularly with the soldiers. The Facebook could be found being worked on in every station at any given moment, smoke breaks were regular, visits to the shekem (bodega type store) happened almost religiously and 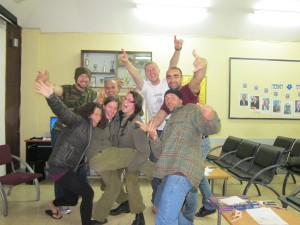 general grooming were ongoing including but not limited to; eyebrow maintenance, lipstick application, and hair braiding. I was amazed at first how lax, unproductive and unmotivated these kids – I mean soldiers really were. Then it dawned on me that when I was their age I was having one party after another, worry about which frat party I was going to attend the following weekend, sleeping till noon for a 12:30 class and thinking about what I wanted to do once college was over. These kids are forced to be in the military, 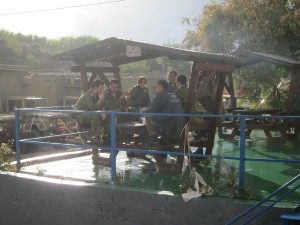 given mundane jobs for 2 or 3 years, not to mention they make a paltry $100 per month. Of course they are bored, brain dead and probably ready to scream. They have to do whatever it takes to survive their time and if that means drinking 2 liters of Coke a day, smoking 10 cigarettes or checking their status on FB then by all means….keep up the hanging out and keep your M16’s facing down and the bullets in a separate pocket!

This entry was posted in Israel and tagged israeli, jerusalem, shwarma, solidiers. Bookmark the permalink.

2 Responses to Lube jobs, helmets and a uniform…my life on an army base in Israel